The Detroit Auto Show is one of the biggest automotive shows on the planet. You get to see and experience everything from stock production cars to ridiculous, over the top vehicles. This year it was also the place for the debut of Buick’s Envision SUV.
The 2017 Buick Envision is a midsize SUV. It’s what you’d call a midsize crossover, putting it somewhere between the large SUVs and smaller, compact crossovers like the Encore. Buick has great hopes for the future of the Envision. Its smooth ride and high-end cabin leave it positioned quite well, when compared to the competition.
Visual Appeal
Let’s start with its looks. The 2017 Buick Envision cuts a dashing silhouette! The design is understated, elegant and refined. Everything Buick owners have come to expect and more. Owners of a Buick SUV want exactly that, understatement and discretion and the Envision delivers.
The sides have elegant wheel arches, really bringing out the car’s proportions. They seamlessly bring the front of the car and the rear together. The long body line starts from the front arch, and swoops down to the very bottom of the SUV, forming a nice arch on its own. As you go further back, it starts to dissipate and blend in to the rear wheel-well. The second, higher body line starts from the front door and runs to the back into the taillights through the mid-section.
The back of the 2017 Buick Envision is interesting too. The Buick emblem is chromed and it’s positioned just below the rear hatch wiper. It’s got a small overhang, but the rather square stance makes it look really unique. The LED brake lights are very well designed and look stunning, especially at night. Below them you’ll find a reflector on each corner with a single exhaust tip peeking out on each side.
The Details
The interior makes the Envision really stand out in its segment. Simply put, nothing can even come close to it. The first thing which really makes an impression is the dashboard. It blends into the doors very smoothly, as if it’s fading away. The cluster sitting behind the steering wheel has a digital speedometer but analogue gauges on either side of it. The center of the dash stores the IntelliLink system. The SUV has in total of 4 USB ports, 4 outlets with 12-volts and a single 120-volt one. There’s genuine leather wrapped around the steering wheel, which, by the way, features a new design now. Ergonomically mounted switches means that you, the driver, don’t ever have to take your hands off of the steering wheel again. Everything is right at your fingertips.
Both front and rear seats have heat warmers, and so does the steering wheel. If you want to go all out you can even get your Envision with front cooled seats. The back seats don’t have a fixed position, so you can slide them and organize them to your liking. Naturally, the last row folds in a 60/40 split.
There’s lots of cargo space too. In fact, there’s so much cargo space that you’d struggle to find more on any other small crossover, say for example the RDX or even a MKC. The best thing is that no legroom or headroom has been sacrificed to offer that cargo space. The panoramic roof is an excellent option, it’s beautiful and practical, but it’s especially gorgeous in starry nights.
Under the Hood
Under the hood you’ll find a turbocharged 2.0 liter four-cylinder producing 252 horsepower and 260 lb-ft of torque. It’s mated to the same six-speed auto gearbox featured in many other GM products. If you opt for this in the beginning, you can get your Envision with a Twin Clutch all-wheel drive system which is GM’s first active system. It only kicks in when it has too, remaining in two-wheel drive configuration most of the time. 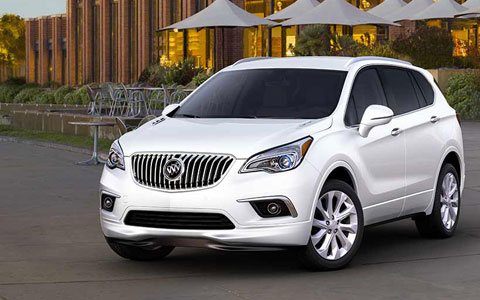 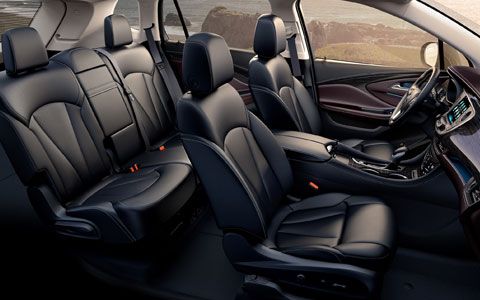