It wasn’t too long ago that the Buick Avenir concept made its debut, at the 2015 Detroit Auto Show, where it got a lot of enthusiasts excited. Excited at the prospect that a four-door flagship sedan from Buick, perhaps in the form of the Electra or Park Avenue, was finally coming. Well, rather unfortunately, it remained just a concept, but it did inspire the brand new LaCrosse unveiled later the same year at the Los Angeles Auto Show. The design is heavily borrowed from the concept car, with Buick confirming it’s the face all their models will receive by 2018.
Like we said, the 2017 LaCrosse is completely redesigned. The interior feels much more premium, the trunk is bigger, it gets new features and elements, and even improved ride quality with better handling characteristics. Buick has a lot riding on the LaCrosse as the one model to fully bring them back in the game. Whether it will succeed is yet to be seen, but the future certainly seems to be heading in the right direction for them.
Trim
As a full-size sedan, the LaCrosse is offered four trims: base (1SV), Preferred, Essence and Premium. The base offers 18-inch wheels, xenon lights (automatic), heated mirrors, a rearview camera, foglights, rear sensors, keyless ignition, keyless entry and a dual-zone climate control. It’s the perfect entry-level sedan for anyone who’s looking to save a few bucks. Then there’s the Preferred trim, adding satellite radio and a power-adjustable steering wheel.
Moving up to Essence gives you adaptive headlights, leather upholstery, driver-seat memory functions, wireless smartphone charging ad an optional Driver Confidence 1 package which includes blind-spot monitoring and rear cross-traffic alert. The Premium trim is basically the full deal. It’s equipped with everything Buick was able to cram into the LaCrosse, including the Driver Confidence 1 package as standard, forward collision warning, a heads up display, ambient interior lighting, lane departure warning, as well as ventilated and massaged front seats. The Driver Confidence 2 package with adaptive cruise control and automatic emergency braking becomes optional.
Design
It’s still unmistakably a Buick, but because it’s based on the Avenir’s design, the entire front fascia receives a much newer look, especially the waterfall grille. The sculpted hood is brand-new, as well as the headlights which received a redesign and are now more closely related to the Avenir. They’ve been elongated and slightly reduced in height, giving off a more aggressive demeanor. The bumper has been restyled to fit a wide and slime air intake along with a slim chrome strip going all the way from one side to the other.
The rear fascia gets even bigger updates than the front. The entire rear deck has been remodeled to boast a sportier and much cleaner look, devoid of any excess chrome elements or thick accessories. The new chrome inserts around the taillights were adapted and kept, integrating nicely into the trunk. The wheelbase is slightly longer 2.7 inches, so the side profile is that of a more elegant and majestic car than the previous LaCrosse.
Interior
The interior was, to a certain degree, inspired by the Avenir as well, but for obvious reasons such as cost and complexity, toned down a bit. Still, it’s one of the most elegant designs we’ve seen come out of Buick in the last decade or so. The dash is large with a swooping motion at the center console just like a waterfall. Buick has mixed large pieces of wood with small aluminum inserts, and we have to say it looks gorgeous. The “floating” center console which is almost suspended in mid air is perhaps the best feature of the entire cabin.
Speaking of the cabin, it’s filled with soft materials everywhere. Even the plastics (the few that are present) feel nice and durable. They spared no expense inside, and it shows in the craftsmanship and materials. The three interior trim choices (Jet Black, Dark Atmosphere and Shale, and Jet Black and Brand) have been inspired by fashion, as Buick claims. Legroom and headroom have both been increased, as well as storage space. Tech-wise, it’s got almost everything you’ll ever need, and that much more on top of it. The eight-inch touchscreen does wonders. It’s fast and intuitive thanks to the IntelliLink infotainment system operating it. Overall, the quality reeks of premium, and we don’t say that lightly about all the cars we drive.
Engine
The hood houses a GM 3.6 liter V6 unit. Although it’s got the same displacement and cylinder count as the previous unit, it’s actually a brand-new one, lifted straight from the Cadillac XT5 SUV. It delivers 305 hp and 268 lb-ft of torque. Admittedly, that’s just a one horsepower increase from the previous model, but the fact that the new car weighs 300 pounds less than the old one means it’s faster and more economical.
The engine is mated to an eight-speed auto which is fast, firm and precise. The engine uses Active Fuel Management and stop/start technology, which decrease fuel consumption drastically. The only drawback, if you can call it that, is the fact that the stop/start system cannot be disabled, but we never needed nor wanted to do that.
Front-wheel drive is standard on all models, but customers can tick the all-wheel drive system option for added confidence and capabilities. A Continuous Damping Control option replaces the MacPherson struts with a HiPer strut suspension at the front. The rear uses a traditional five-link system, no matter the front configuration.
Conclusion
The LaCrosse, which starts at just $37,905, is a superb mid-class luxury vehicle that delivers a ton of value for the dollar. Its premium feel and elegant expression leaves the driver feeling like they’re in a premium European rival. The fuel-efficient LaCrosse delivers on all its promises and exceeds your expectations at every turn. If you want comfort, luxury and style at an affordable price than the 2017 Buick LaCrosse may be just what you are looking for. 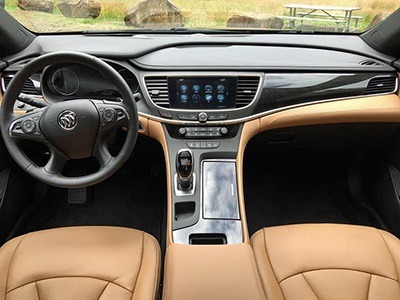