You have undoubtedly seen a Chevy Cruze Hatch, cruzing the Kitchener streets. Zipping in and out, parking with ease downtown, maybe even unloading the family for a Rangers game. You’ve probably seen one and not even known that it was a Chevrolet.
Hatchbacks are some of the most popular vehicles in Europe, they always have been. Recently however, the popularity of small hatchbacks in the U.S. and Canada has been on the rise. When you look at what they offer as a complete package, they’re arguably the best type of vehicle to own. Slightly bigger and more practical than a small city car, but not as big or as sluggish as a sedan, they’re ideal for most situations. No, not the best in anything in particular, but one of the finest all-rounders.
The 2017 Chevrolet Cruze Hatchback is essentially a shorter version of its sedan brother, the Chevrolet Cruze. Unveiled at the 2016 North American International Auto show, it attracted a lot of attention. The Cruze Hatchback has been on sale in a few other markets worldwide for some time now, but it’s finally made it to Canada.
Looks are relative, but overall we like the fun-factor the Hatchback provides a little more than the sedan. Appearance wise, it looks sportier and “more fun” than the sedan, but head and heels above anything the competition has to offer. The sawn off rear end makes it more aggressive, but it isn’t overwhelming. It’s a subtle kind of sportiness! The multiple body lines running throughout the length of the car add a real depth to the design that most other cars in this segment just don’t have.
The front fascia has relatively the same look as the Cruze sedan. The rear however is a whole other story. The sloping line gives it an elongated look, rather than just making it appear smaller. The optical illusion created with this is that it has longer overhangs than it actually does. The slanted top spoiler above the rear window brings even more sportiness into the design, and it fits in with the entire concept well.
Unlike the Cruze sedan, you can’t get the 2017 Cruze Hatchback version in L or LS trim. The two basic trims have been dropped from the sedan in the hatchback, effectively making the LT the base trim here. The flagship model is still the Premier, so nothing changed there. The flagship model is still the Premier, so nothing changed there. The top of the line Premier trim is fitted with cool 18-inch wheels which bring out the car’s sportier side even more. If you really want, you can get the Cruze Hatchback with an RS package. It adds new front and rear mouldings and a different rear spoiler.
The interior remained virtually identical to the previous year’s car. Not really surprising honestly. Interior changes happen over multiple generations and not overnight. Most of the materials, design and features are a direct carryover from the sedan but that’s not a bad thing. The second-gen Cruze had great cabin quality with excellent materials, not just compared to the first generation Cruze, but to its competitors too. In fact, they were so good at the time, that they’re still at the top even now. You’ll find next to no hard-plastics and unfinished materials in the Cruze. All the materials feel far more expensive than they actually are, and the interior is a pleasant place to spend time in.
Did we mention that the 2017 Cruze Hatchback is loaded with lots of features most competitors can only dream about? The seven-inch display displays Chevrolet’s MyLink system and the cool thing is that it’s actually a touchscreen, making operation and interaction with it that much easier. Like in most modern cars, you get wireless charging for phones as well as Android and iOS connectivity.
The hood hides a familiar sight: the 1.4 liter four-cylinder complete with a turbocharger. It’s got an aluminum construction (not iron) which saves weight and makes it more reliable. Direct fuel injection comes as standard, as do four valves per cylinder. The 1.4 liter unit feels extremely rev-happy and is willing to pull from anywhere in the rev band.
The updated unit gets 15 more hp and 28 more pound-feet of torque. Efficiency has been improved too, as it now returns 40 mpg thanks to a stop/start system. The six-speed manual is better than ever, and even the six-speed auto sees some much needed improvements.
No other engines are in store, at least for now. Still, it’s not like the 2017 Chevrolet Cruze Hatch needs anything else. It’s one of the best vehicles in its class and arguably the best vehicle Chevrolet makes. Prices start at $20,595 for the base model (remember, the base here is the LT), and go up to $24,645 for the flagship Premier Auto before options. 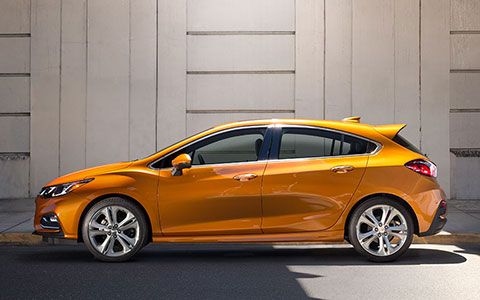 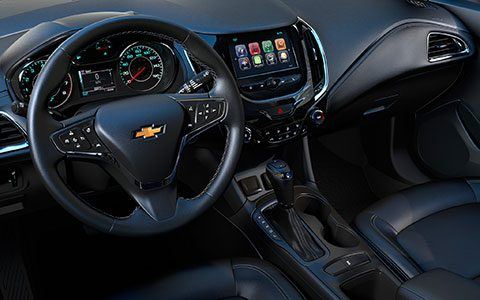