If you’re in the market for a midsize sedan that’s practical, luxurious and stylish, the Chevrolet Malibu may just be the perfect choice. With a fresh, sharp appearance and fun chassis backing it up, it’s certainly not lacking anything at first glance. There’s also a Malibu Hybrid if you’re into hybrids. For 2017 Chevrolet discontinued the 2LT trim for reasons that it was too feature-heavy. The Premier trim gets a new transmission and the rest is largely unchanged. The Malibu received a major update recently, so we’re glad they decided to keep it as it was.
The Malibu model has been a hit and a miss for most of its life. People either liked it, or they completely despised it. The last generation wasn’t really inspiring, in fact, it was somewhat dull and predictable. The redesign the Malibu model received last year however, changed everything. Suddenly, the Malibu looked as good as it performed. It wasn’t just great mechanically and on paper, it was a head turner too.
All it takes is just one glance at it and you’re mesmerized. It’s a handsome looking brute, especially compared to its mediocre competitors. Unlike most of its rivals, there’s no understatement here. It’s aggressive, mean, and proud of it. The double-grille at the front coupled with the mean-looking headlights gives off an aggressive vibe and aura. It almost looks like a smirking shark. Imagine this thing in your rearview mirror. You’d be intimidated, wouldn’t you?
The back is somewhat more conservative. With a large, perched rear overhang, angular taillights, dual exhausts at the bottom and a slanted roofline at the top. The side, profile look is perhaps the most interesting. It manages to combine three different lines into a perfectly synchronized design. The front one starting at the front wheel arches slants downwards to the rear wheels, where it meets the lower crest styled upwards. The rearmost styling line starts off at the rear door handle and blends into the rear spoiler, just above the rear taillights. The long silhouette with big overhangs and large wheels makes the Malibu one of the best-looking sedans currently on the market.
The 2017 Chevrolet Malibu comes in four trims: L, LS, LT and Premier. The Hybrid is considered a stand-alone edition, as it’s more than just a trim. The L is pretty basic, with 16-inch steel wheels, keyless entry, keyless ignition, automatic headlights, cruise control, cloth upholstery, A/C, OnStar and Bluetooth connectivity. It’s alright if you want the basic Malibu experience, but we’d recommend the higher trims as they offer more value for money.
The LS gives you alloy wheels, 4G LTE connectivity, a rearview camera, Bluetooth streaming and Chevy’s excellent MyLink infotainment system with the appropriate Apple and Android smartphone integration. The LT gets larger 17-inch alloys, LED daytime running lights, ambient interior lighting, satellite radio and heated mirrors. Finally, there’s the flagship Premier trim. It’s fully loaded with everything Chevrolet could cram into the Malibu, so it’s got 18 inch alloys, LED taillights, dual exhaust tips, a heated steering wheel, navigation, dual-zone climate control (auto) and memory settings for the driver. There’s a Sport package as well as a Driver Confidence I and II if you’re willing to pay the premium. We recommend the latter as they can prove to be valuable in day to day driving situations.
Inside, it’s classic Chevrolet. The design is simple and minimalistic. The buttons are ergonomic and everything is laid out logically. Materials are above average too, which we did not expect at all, especially for the affordable price they’re offering it at. The seats are nice and comfortable, perfect for long trips. There’s ample cabin space in both rows. Those in the rear will feel just as comfortable as those in the front, with plenty of leg and headroom. This is a true five-seater, although four adults would travel in comfort practically throughout the world. The sloping roofline didn’t prove to be a challenge, even for taller people. The only thing lacking was a bit of character in the form of different colored accessories and elements, but the ambient lighting more than made up for that.
Every 2017 Chevrolet Malibu is front-wheel drive as standard. The L, LS, and LT trims receive a six-speed auto paired with a 1.5 liter four-cylinder developing 160 horsepower and 184 pound-feet of torque. Don’t underestimate its small capacity. It’s willing to rev its heart out without complaining. The turbocharger kicks in effortlessly, with no noticeable turbo lag. It’s a good drive, but the bigger engines suit the Malibu better in our opinion. Still, with a 30 mpg combined return, you can’t really fault it.
The Premier gets the new nine-speed auto and a larger 2.0 liter four-cylinder turbocharged unit making 250 horsepower and 260 pound-feet of torque. The eight-speed unit it replaced was already smooth and fast, so we didn’t feel the new one would make a big difference. It did however. It’s one of the best transmissions fitted in any sedan, German rivals included. As an auto, it’s wonderful. The powerful engine and short shift times means the Malibu can reach 60 mph in just 6.4 seconds, a faster than average time for this segment.
The Hybrid receives a 1.8 liter four-cylinder engine, as well as the Volt’s electric system and motor. Total output is 182 horsepower and 277 pound-feet of torque, resulting in a 7.5 second sprint time to 60 mph. The Malibu Hybrid is one of the fastest hybrids we’ve ever tested. It also returns 46 mpg on the combined run, because it’s a hybrid.
If you’re after a great midsize sedan, look no further. The Malibu finally has the looks to match its capabilities. It’s practical, comfortable, luxurious and affordable, all the things a great sedan should be. 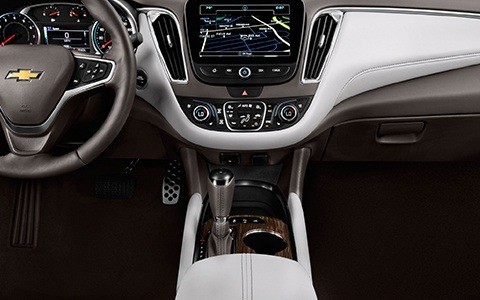