The Chevrolet Silverado received numerous changes last year. The 2016 model saw a new front grille and modern LED lighting, it also got more responsive touchscreens which improved the car-user interaction, as well as smartphone integration for both Android and iOS. For 2017, Chevrolet decided to further improve it with the help of numerous small changes. For starters, it now has active grille shutters which save fuel by restricting air flow when not needed. The Teen Driver package is standard across the entire range and LT trims (and above) get a rearview camera as standard.
Depending on how you want to spec the Silverado, you can turn it into a lot of things, as the possibilities are nearly limitless. The base model makes for a great, affordable workhorse, which won’t ever let you down. Go for the flagship model with all the amenities, and suddenly you have a large luxury off-roader, more than capable of doing daily chores without losing its off-roading capabilities.
Arguably, the best model of the entire Silverado lineup is the Silverado 1500. We understand that you choose a truck based on what you need, but both as a performer, and a bang for your buck value proposition, you can’t really beat it. Being a full-size pickup truck, it’s probably one of the most versatile vehicles currently on the road.
Starting off the review in the only way we can with a truck: its engine. And boy, is it a performer. Standard on nearly all trims is the GM 4.3 liter V6 engine developing 285 horsepower and 305 lb-ft of torque. You won’t find a manual, only the durable six-speed automatic transferring power to the truck’s rear-wheels in standard form, or all four if you go for the optional 4×4 system.
The V6 offers more than acceptable performance. It accelerates the truck to 100km per hour in 7.7 seconds (the rear-wheel drive truck). That’s around average for the class, slightly leaning towards the faster end of the pack. Fuel economy is average for this segment too, as it returns around 20 miles per gallon on the combined run (19 for the 4×4 Silverado). For such a big truck, that’s a great result.
The “middle of the lineup” engine choice is a 5.3 liter V8 engine developing 355 horsepower and 383 lb-ft of torque. It’s standard for the High Country and LTZ trim. Power is sent to the wheels via an eight-speed automatic, although the standard transmission for the lower trims is the same six-speed automatic (the newer eight speed auto is optional there). Fuel economy is slightly worse compared to the more efficient V6, but just ever so slightly. It’s a drop of 1 mpg to be exact, which drops the numbers to 19 for the six-speed auto 5.3 V8, and 18 for the model with AWD (and V8 engine).In all honesty, you’ll hardly ever notice the decreased fuel economy.
The flagship engine is only available on the two highest trims, LTZ and High Country. The engine in question is the standard GM 6.2 liter V8. Yes, that one, found in most GM sportscars. It’s mated to an eight-speed automatic which sends all of the 420 horsepower and 460 lb-ft of torque to the wheels. Performance is astonishing for a truck of its size.The sprint from 0 to 60 takes just 5.9 seconds, making it one of the fastest trucks in its respective segment.
Economy suffers a bit, but not by much. It falls down to 15 mpg in worst case scenario, although you can keep it at 17 if you try. The towing package is available for all trims and engines, and it increases maximum towing capacity by a significant amount. The smallest V6 engine can tow 7,600 pounds, and carry just above 2,000 pounds. The smaller V8, the 5.3, tows 11,100 pounds and it can carry 2,260 pounds of payload. The beastly 6.2 V8 is the clear winner when you want to tow heavy things. It can tow a staggering 12,000 pounds and has an equally big payload of 2,140 pounds. That’s almost unheard of towing capacity for this segment.
The exterior of the Silverado is still great thanks to the 2016 update, with lots of styling cues following Chevrolet’s current design language. The fit and finish of the cabin is great, and it will undoubtedly surprise many people who expected the Silverado to fall short in that area. There are lots of small spaces for storing your things, and there are even USB ports for every occupant. The infotainment system is really responsive and it does its job brilliantly.
The handling is best in class, unrivaled. The 2017 Chevy Silverado simply outperforms every other truck in its segment when it comes to dynamic capabilities. It’s by no means a sportscar, but it’s more than adequate. The suspension is soft so it absorbs all the bumps, but not so soft that the truck rolls through the corners.
We recommend going for the 5.3 liter V8 as it’s offering the best of both worlds. You get a V8 with more power than the V6, without the 6.2 liter V8’s lower fuel economy. It even has cylinder deactivation, so you get to save fuel when you don’t need full performance. 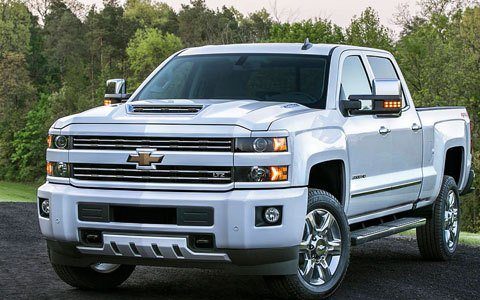 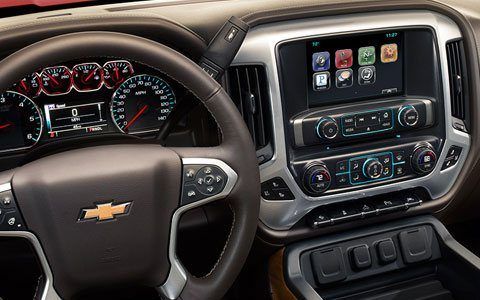