The naturally-aspirated engine is on its last legs, there’s no discussion about that. Most manufacturers are switching over to turbocharging, and even the most die-hard fans of natural aspiration, such as Porsche, are turning their iconic 911 model into one running a turbocharged engine. The 911 GT3 RS and the Mustang GT350R seem to be the last hurrah for the naturally-aspirated sports car, or are they?
Because, let’s not forget the Corvette C7. When it launched, opinions were split. Some people didn’t like the styling as they thought it deviated too much from the Corvette tradition, others loved it. Either way, no one denied that the way it drove was nothing short of spectacular. The ZR1 model proved to be one of the fastest sports cars of today, and for 2017, rather than changing every model separately, Corvette decided to introduce an entirely new version of the C7. If you know your Corvette history, you’ll at least be familiar with the Grand Sport name. It was originally used on 1963 Corvettes that dominated race tracks in that period. The last time it was used with the same meaning was in the C4 Corvette. After 3 generations, it’s finally back, in the C7 generation. So, what is it about then?
In short, it’s a light-weight track car which slots right in the middle between the standard C7 and the Z06. Think of it as the best of both worlds. It’s better than the C7 on the track, and it’s more comfortable than the Z06 on the street. It’s the perfect compromise, the ideal solution for everyone who wants to experience the Z06 flavor but doesn’t want to spend Z06 money. Under the hood, it’s got the same 6.2 liter V8, but, unlike the Z06, it’s naturally aspirated. That’s right, it ditches the supercharging in favor of glorious engine noise and immediate accelerator pedal response. The result is 460 pure horsepower being extracted from GM’s LT1 V8.
Although it’s nowhere near the Z06’s 600 horsepower, it’s actually more enjoyable for everyday driving, and even some spirited driving on the canyons. The entire driving philosophy is to include the driver as much as possible. It may “only” have 460 hp, but they’re directly connected to your right foot, with no sort of lag exhibited by the supercharger or turbocharger because, obviously, they aren’t present.
It’s not strictly a track car, but it is track oriented, a lot more than the normal C7. To achieve added stability and cornering ability, they’ve widened the car. It’s not by a lot, at least not as much as the Z06, but it is noticeable when you’re driving it. It feels more planted throughout the corner, especially midway.
The wheels are 19-inch at the front and 20-inch at the rear. The front tires are 285/30 large and the rears are 335/25. The wheels sit on Michelin Pilot Super Sport tires, one of the best tires for a performance vehicle of this caliber. The Magnetic Ride Control is standard, and you get specially tuned anti-roll bars with transverse leaf springs. The rear fenders are wider to accommodate the added width and tire, and keeping things nice and cool, we have the grille as well as the cooling system lifted straight from the big, brother, the Z06.
The front has massive 14-inch discs, and the rear isn’t far off, as they measure in at 13.4. The fronts get six-piston calipers, while the rear makes do with “only” four-piston ones. Rather surprisingly, the brakes are bigger than the ones found on the Z51 package (optional), but naturally, they’re way smaller than the Z06’s.
The 6.2 V8 is mated to GM’s 7-speed manual, and an eight-speed auto takes care of the automatic side. With drive involvement at an all time high, it would be silly not to go with the manual. It’s much more involving, even if it is a bit slower. But you get the Z06 if you want lap times, this is for the people who want fun. It’s slick, the gears are nicely aligned and it’s a joy to use.
The Gran Sport comes as a coupe and a convertible. Both are equally jaw-dropping, but we would go for the coupe. It’s a bit stiffer, and it suits the character of the car more. The standard C7 convertible is all the car you’ll ever need if you never plan on tracking your car.
The Z51 dry-sump lubrication system comes standard in the 2017 Corvette Grand Sport. It isn’t really relevant for everyday driving, but it makes all the difference in the world once you’re on track. The lubrication system takes care of engine oil during hard cornering, ensuring it never overheats. And although you’ll never reach the insane 1.20 G the Z06 can pull, you’ll still get up to 1.05G, more than enough to scare yourself.
The Grand Sport Collector Edition is a special model (version) of the Vette. It offers a Watkins Glen Gray Metallic paint which is unique to the Collector Edition, but changes don’t stop there. There are satin-black racing stripes along with Tension blue graphics, gorgeous looking black wheels and even special Tension Blue interior. It’s more of a collector’s car, as the name suggests, but nothing’s stopping you from driving one hard.
Picking holes in the 2017 Grand Sport is really difficult. It delivers more than it advertises, and that’s not always the case with these cars. It’s great fun both on the road and on the track, but if you want a more track-oriented car without switching to the big brother, the Z07 package might just be right for you. It’ll give you carbon ceramic brakes along with Michelin Pilot Sport 2 Cup tires, which offer extra grip. There are a few other changes as well, but suffice to say, it’s the Z06 minus the power. 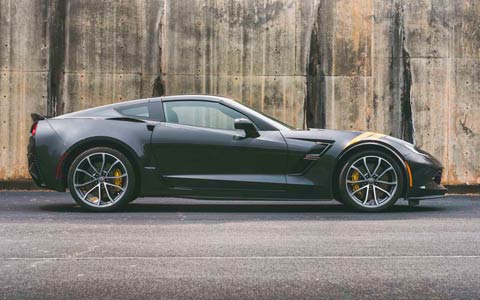 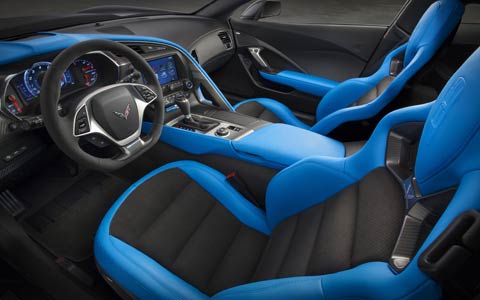