Downsizing is something no manufacturer can escape. Each year, as cars get bigger and offer more space, the actual unit powering them is getting smaller. We don’t mean just volume-wise too, but cylinder count is decreasing as well. Even the largest of SUVs can be outfitted with a four-cylinder under the hood these days, or a six-cylinder if they’re lucky. Thirsty, big engines are being replaced with smaller, more efficient ones. The midsize SUV market is the fiercest automotive market at the moment. It’s where nearly all manufacturers are present, and are looking to do well, as that’s where the profit lies. It’s why sedans and hatchbacks get a redesign every couple of years, but it almost seems like SUVs get updates every year or so.
The 2017 GMC Acadia is arguably one of the best SUVs on the market. It always has been. The problem is that this sector gets so many redesigned vehicles every year that it’s difficult to stay at the top. For 2017, the GMC Acadia doesn’t just receive a few updates. Oh no, this is an all-new Acadia you’re looking at. Before we dig deeper into the car’s changes and features, let’s talk why the Acadia is such a great proposition.
You can think of the GMC Acadia as the stylish SUV alternative to a minivan. And if we’re comparing it to a minivan, that only means one thing: it has three rows of seats. The Acadia is a great vehicle for families of five or more members, who need the extra space and even the four-wheel drive capability, but don’t like the looks of a minivan. You’ll all agree, the 2017 Acadia is miles ahead of any minivan when it comes to exterior appearance.
The new, redesigned model is even more handsome than the last one. The lines and shapes present on the body are gorgeous, viewed from any angle. This is a car which reflects GMC’s current design vision in the best way possible. Size-wise, the new Acadia is slightly smaller than the old one, by 7 inches in length and 3 inches in width, but don’t worry, it doesn’t sacrifice interior space to do so. It’s also 4 inches lower, giving it a much sportier and meaner appearance.
Now, although no cabin space was lost in the redesign, the Acadia’s party piece is gone. That’s right, it can no longer carry 8 passengers, as the maximum number is now 7. Although we do get the point GMC is trying to make that rarely anyone was carrying 8 people, it was still great to know you could do it. On the bright side, those 7 people will travel in absolute comfort, and since none of the Acadia’s rivals offer 8 seats anyway, it’s not like it lost anything.
One good thing about downsizing, both the engine and the overall dimensions, is the weight savings that come with it. The 2017 GMC Acadia is a staggering 700 pounds lighter than the old SUV. That, you’ll agree, is a massive amount of weight, nearly as much as two full-sized bikes.
The other big news here is the four-cylinder 2.5 liter unit, developing 194 horsepower and 190 lb-ft of torque. Although it doesn’t sound like a lot, for a four-cylinder, it’s really impressive. What’s more, it measures up to all of the rivals’ base engines, and it beats them in nearly every measurable way. The SL trim is the only trim which doesn’t get the AWD system as optional, and both AWD and FWD versions return 23 mpg on the combined run.
Like most of its competitors, the Acadia offers an optional unit, a more powerful 3.6 liter V6 that we’ve come to know and love. It develops 310 horsepower and 271 lb-ft of torque. Apart from the power and torque advantage of the V6 over the four-cylinder, there’s also the increased towing capacity, because V6 can tow 4,000 pounds if fitted with the right towing package.
Both engine options are mated to a six-speed automatic, with no option of a manual. Let’s be honest here, who wants a manual in a big, luxury SUV? No one, exactly. Like we said, for 2017 there’s an all-new system which gives the driver different drive modes. They change the configuration of the engine, suspension and transmission depending on the chosen setting. The settings are as follows: Sport, Snow, Towing, and Off-Road, but that’s only found in models equipped with the all-wheel drive system.
For 2017, there’s a new trim too. Dubbed All-Terrain, an Acadia equipped with it can only carry 5 passengers, but gains a lot of cargo room. Like the name suggests, it’s made for the more adventurously inclined, but it’s still restricted for light off-roading. Still, the added cargo means you can carry lots of stuff on a camping or road trip.
The cabin is excellent no matter what trim you go for. No one ever complained about the previous car’s interior, but the new one trumps every other SUV in this segment in that regard. All of the materials are superb, and the fit and finish is equal to that of German rivals. The seating position is great, and there’s more than enough space for 7 people. The rear row should be reserved for kids, but adults can sit there for short periods of time.
The infotainment system gets a massive upgrade too. Smartphone integration is standard for Android and iOS devices, and there’s the latest 4G LTE connectivity which you can use as portable WiFi hotspot.
If it was our own money, we’d seriously consider the Acadia. It’s one of the best luxury SUVs currently on the market, and it’s competitively priced. It’s the perfect choice for Kitchener, Ontario, especially in the winter time. 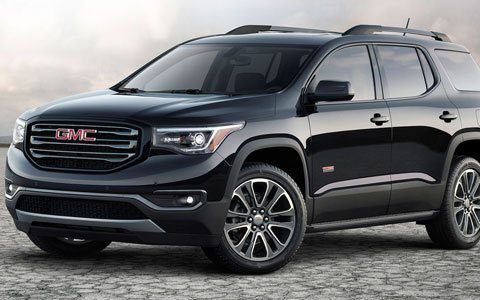 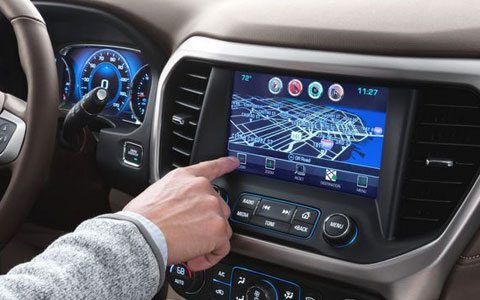