The GMC Terrain is GMC’s compact crossover SUV offering, and it’s one of the best in its class. There are several reasons as to why most experts and users feel that way, the V6 under the hood and the big backseat may have something to do with it, but you’ll have to read on to find out the rest of the story.
The Crossover SUV segment is a relentless one. You either update your car regularly and improve it, or you lose sales and popularity, it’s as simple as that. So how come then, is the Terrain still the favorite, despite being in production for eight years with no major update? Well, the fact that it was light years ahead of its competitors when it was first launched is probably the biggest reason. Its unique characteristics attract more and more people into the brand, and there are no signs that anything will change anytime soon. The 2017 GMC Terrain remains largely unchanged. It receives 18-inch alloy wheels and a black-trimmed Nightfall appearance package on the options list, but that’s about it. So, what exactly are these characteristics which make the Terrain so popular you might ask?
For starters, there’s the way it looks. Most designs date in two to three years, but not this one. The Terrain looks as modern and crisp as the day it let the factory. Its design is not as smooth as most modern SUVs, but that’s the key to its success. Just take a look at the square, oversized fenders for instance. They suit the look of any SUV, let alone the Terrain, and we’re not entirely sure why most SUVs don’t have them. The front features the same, square kind of appearance. It’s boxy if you look at it head on, with a lot of road presence. The V-shaped grille is large, spanning from the top of the hood to the middle of the bumper at the bottom. Traditional GMC projector style headlights finish off the front-fascia, to form a visually striking look. The back is unchanged.
The GMC Terrain is offered in five different trims; SL, SLE-1, SLE-2, SLT and Denali. The base SL offers 18-inch alloys, auto-dimming rearview mirror, cruise control, power height-adjustable driver seat, a rearview camera, OnStar, Bluetooth phone and the usual array of features such as a 60/40 split and USB ports.
The SLE-1 upgrades the base SL with heated mirrors and satellite radio. You can also choose the all-wheel drive system, something the SL does not offer. The SLE-2 is an upgrade to the SLE-1, with LED daytime running lights, automatic climate control, a leather steering wheel, eight-way power adjustable driver’s seat, an amazing Pioneer audio system with eight speakers, voice control and Pandora compatibility. There’s also the Convenience package, which adds heated front seats and remote engine start.
The SLT gets the Convenience package as standard, in addition to chrome exterior accents, perforated leather upholstery and interior ambient lighting. Two different Driver Alert packages are available on both the SLE-2 and SLT. The first one offers blind-spot monitoring, rear-cross traffic and rear parking sensors. The second adds forward-collision and lane-departure alert. Finally, there’s the flagship Denali. It builds on the SLT with 19-inch alloys, comfort-oriented suspension and unique interior, available only in the Denali. The Memory and Driver alert packages come as standard.
GMC may be known as a truck brand, but the interior of the Terrain is up there with the best of them when it comes to luxury. The design is nice, and all the buttons are positioned ergonomically. The gauges are clear to read, and so is the large touchscreen in the middle. It’s truly a great place to spend your time in.
The seats are supportive and comfortable at the same time, with an incline to comfort more than support. They’re perfect even for people of taller stature, and because the interior is so spacious, you’ve got loads of head and legroom. You can comfortably fit five adults in the Terrain, because the standard sliding rear seats give you plenty of options when it comes to adjustability. The Terrain offers the most room for passengers in the second row in its segment. Boot space hasn’t been compromised to achieve that, with 31.6 cubic feet available with the rear seats deployed, and 63.7 cubic feet when they’re down.
The standard engine is a 2.4 liter four-cylinder with 182 horsepower and 172 lb-ft of torque. The SLE-2, SLT and Denali trims get a 3.6 liter V6 unit as optional. It develops 301 horsepower and 272 pound-feet of torque. Both engines are mated to a six-speed auto and come in front-wheel drive variants as standard. All-wheel drive is available on all trims except for the base SL.
Although the four-cylinder is more than capable of moving the light Terrain chassis around, it’s no match for the larger V6. The V6 is the Terrain’s party piece. It’s by far and away the fastest SUV in its class, reaching 60 mph in just 7.1 seconds when fitted with all-wheel drive. To give you a reminder of how fast that is, consider that similarly powered rivals achieve the same sprint in 8 seconds or more.
The four-cylinder engine returns 25 mpg on the combined run, or 23 mpg if the model in question is fitted with the all-wheel drive system. The V6 is slightly thirstier, but with so much power on tap, it’s to be expected. It returns 20 mpg on the combined run and 18 mpg for Terrain fitted with AWD. The four-cylinder engine is capable of towing 1,500 pounds. The bigger V6, fitted with the right towing package, can tow a much more respectable 3,500 pounds.
The 2017 GMC Terrain is perfect for anyone who’s after the most diverse crossover SUV. It’s luxurious, practical, handsome, and with excellent off and on-road dynamics, the perfect daily as well. 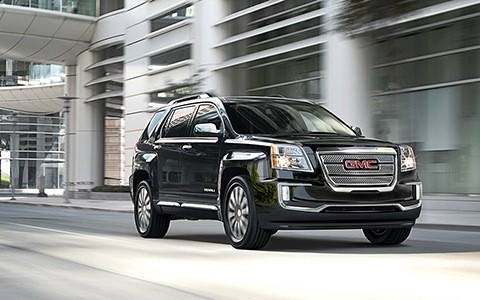 Enter your name, email, and phone number for a chance to win up to $1000 off your new SUV, or used vehicle purchase, or other great prizes. Purchase or lease within 6 months to claim your prize. Click here for contest rules.